Gun owners have weak-kneed Republicans scrambling to cover up their anti-gun votes.

Many of these politicians have touted their inflated ratings with the establishment gun lobby as proof for their dedication to the Second Amendment.

But if you look at their voting records it paints a very different picture.

These weak-kneed Republicans are claiming “I voted for Constitutional Carry!” but they are not telling the full story of what really happened in 2021.

They don’t want you to know the behind the scenes deal making that went on last year in the State House.

Last year, the majority of Republican lawmakers had mixed records on Constitutional Carry.

Most of them voted to kill it twice, and voted in favor of it once.

So why did Representatives flip back and forth on this issue?

Because the times they voted it down were the times it was most likely to become law.

And when they knew it had little chance to pass the Senate, they gladly let it through the House so they could claim they were still “pro-gun” when they came back to beg for your vote.

From the very beginning of the session in 2021, House Republican leadership conspired to placate gun owners with a weak restricted open carry bill.

With the support of pro-gun patriots like you, PGR nailed the charge to demand legislators pass nothing less than Constitutional Carry.

The restricted open carry bill was a distraction so politicians could pat themselves on the back for doing as little as possible while killing Constitutional Carry.

In fact, a constituent testified under oath during the Senate hearings for the open carry bill, claiming that her Rep. Bruce Bryant told her that the only reason he voted for open carry was to keep Constitutional Carry from passing.

That sure sounds like a lawmaker accidently saying the quiet part out loud to me.

So when leadership’s weak restricted open carry bill came to the floor of the House, PGR worked to amend the bill into Constitutional Carry.

But lawmakers voted to kill this amendment.

Instead, they opted to pass a weak, leadership-supported Constitutional Carry bill that they knew would not pass the Senate, just to give themselves cover for this election cycle.

Leadership’s plan was to send two bills to the Senate, knowing that the other chamber would gladly take up the open carry bill, instead of Constitutional Carry.

With the support of our members, PGR fought hard to send the strongest pro-gun legislation possible to the Senate in the form of Constitutional Carry.

The tally of that vote where legislators voted to KILL this important pro-gun legislation can be found at the end of this article as House Roll Call vote #1357.

Yes votes were votes to table the Constitutional Carry amendment, thereby killing it.

This left Senators with an easy vote on a weak ‘gun bill’ providing them an option to claim they are pro-gun while avoiding a tough vote and allowing Constitutional Carry to die.

Instead, of fighting for your rights, lawmakers in Columbia kowtowed to leadership’s plan to kill Constitutional Carry in 2021.

And now lawmakers are telling you they supported it without telling you of the plan that was in the works from the beginning: pass open carry to placate gun owners into being quiet and going away.

But weak-kneed legislators and the establishment gun lobby don’t want you to have this information.

Rather than telling you the whole truth, the NRA is only reporting half the truth while providing weak-kneed Republicans cover for voting against Constitutional Carry when it mattered most.

After the open carry bill passed the Senate, it went back to the House with a few changes.

Another Constitutional Carry amendment was offered and voted down, and you can find that roll call vote # 1783 below.

Once again, yes votes are votes to table the Constitutional Carry amendment, thereby killing it.

Ultimately, lawmakers who opposed these amendments sent Constitutional Carry to its death through procedural manipulations and back room deals.

These Reps. voted against Constitutional Carry when it had the best chance of passing and voted for it when it had almost no chance of becoming law.

Anti-gun politicians in Columbia had to use procedural tricks to both KILL Constitutional Carry and mislead their constituents on their true voting records.

And now they’re hiding behind the National Rifle Association and counting on you not to do your homework.

The facts speak for themselves. When gun owners needed them most, these lawmakers voted anti-gun (and sadly the establishment gun lobby is now giving them cover for it).

It’s past time for South Carolina to be a Constitutional Carry state and gun owners have waited long enough.

Please share this with your family and friends and keep fighting the good fight. 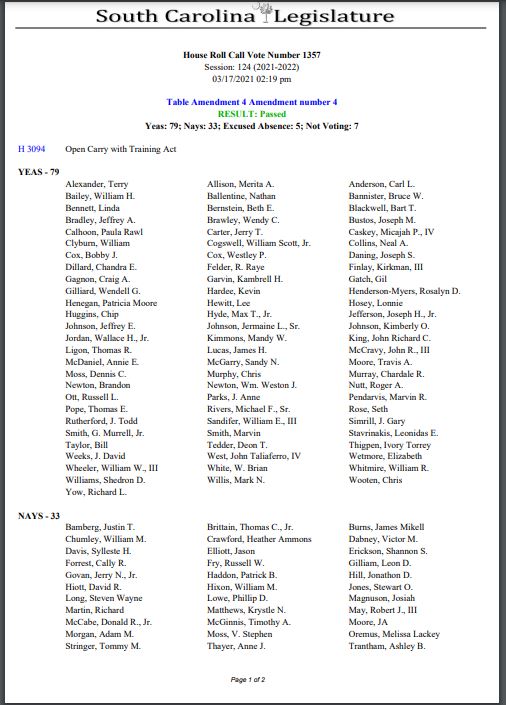 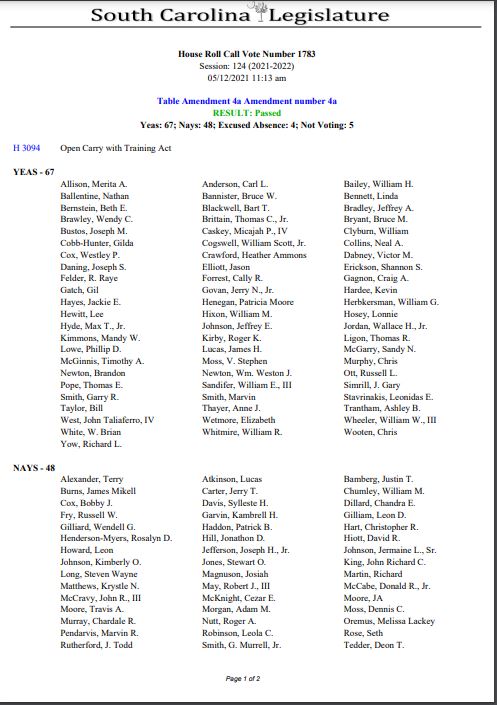 Is Jimbo Martin Hiding Anti-Gun Views?  Dear %%First%%,  "The right of the people to keep and bear arms, shall not be infringed.”  As ardent supporters of the Second Amendment, you and I know that these rights are absolutely critical to a free society. With the runoff...

Rep. Micah Caskey's Abysmal Record Since 2017, your Representative Micah Caskey voted to KILL Constitutional Carry FOUR TIMES, openly maligned pro-gun Representatives that tried to move the ball forward for this pro-gun legislation, and made a motion to successfully...

Rep. Jay West Voted Against Your Gun Rights! Since 2016, when Jay West pledged to gun owners to support Constitutional Carry, he has voted to KILL this pro-gun legislation TWICE and openly maligned pro-gun Representatives who tried to move the ball forward for gun...

Your State House Candidate Howard Barnard is Anti-Gun “The right of the people to keep and bear arms, shall not be infringed.” As ardent supporters of the Second Amendment, you and I know that these rights are absolutely critical to a free society. With the primary...

Rep. Chris Murphy Voted Against Your Gun Rights “The right of the people to keep and bear arms, shall not be infringed.” As ardent supporters of the Second Amendment, you and I know that these rights are absolutely critical to a free society. With the primary season...