Republican legislators in South Carolina have once again proven their skill in snatching defeat from the jaws of victory.

The table had been perfectly set to force a vote on Constitutional Carry on Wednesday, March 17th and restore the God-given rights of gun owners across the state.

But like they often do, 50 Republicans once again sided with anti-gun Speaker Jay Lucas and killed Constitutional Carry.

Fortunately, pro-gun champion Jonathon Hill stood boldly for the Second Amendment and forced every representative go on the record.

Hill’s steadfastness in the face of leadership and so-called “conservatives” cutting deals to undermine a vote on Constitutional Carry is to be applauded.

When others were smirking and chiding him, Rep. Hill charged forward to force a vote on Constitutional Carry, garnering the severe ire of several so-called “Republicans” like Brian White, Micah Caskey, and Tommy Pope.

Worst of all, Representative Bobby Cox, who we once considered a friend of the gun rights movement, did the dirty work of legislative leadership by being the one to make the motion to kill Rep. Hill’s Constitutional Carry amendment.

See for yourself how your Representative voted below. 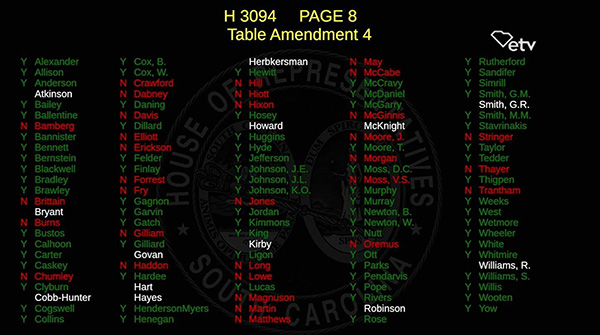 Sadly, there were 14 State Representatives who broke their pledges to support Constitutional Carry when they voted against Rep. Hill’s amendment.

These Representatives all previously pledged to support Constitutional Carry when they signed their PGR Candidate Survey while running for office:

Gun owners have waited long enough for our rights to be restored, and we will not stand aside while Republican legislators continually snatch defeat from the jaws of victory.

Pressure was building over the last few weeks from activists like you, to the point that it seemed plausible that “conservatives” were uniting to amend the restricted open carry bill into Constitutional Carry.

In response to this pressure, Representatives Stewart Jones and RJ May were threatening to offer a Constitutional Carry amendment to leadership’s weak bill, putting Speaker Jay Lucas in a no-win situation.

But after leadership schmoozed “conservatives” with empty promises about a non-guaranteed vote on Constitutional Carry in the future, Jones and May were duped into pulling their amendment at the last minute.

Fortunately, Rep. Jonathon Hill’s amendment was filed behind Jones’ amendment and acted as the perfect insurance policy for just such an occasion, making sure legislators were still forced to go on the record.

While Jones and May went on to vote in favor of Hill’s Constitutional Carry amendment, 50 other Republicans did not.

Sadly, many Republicans would rather put your rights at risk over a private promise from known powerful, anti-gun politicians, instead of just fighting for Constitutional Carry.

And if leadership decides to allow this vote to fail, it will be because of naïve Republicans who trusted in the political class, instead of their constituents.

Although we do not expect Jay Lucas to allow a fair vote on Constitutional Carry before the crossover deadline, we sincerely hope that they make good on their “promise.”

We must keep up the pressure to make this happen.

Thanks to the hard work and activism of thousands of gun owners across the state, Constitutional Carry has made some serious strides this year.

Never before has there been so much pressure that leadership would even entertain the idea of allowing a Constitutional Carry bill through the committee process.

And that’s all due to your unwavering support.

For communication from PGR staff about Second Amendment issues in South Carolina.

Copyright © Palmetto Gun Rights | 4711 Forest Drive, Ste 3 #298 | Columbia, SC 29206
Palmetto Gun Rights is the South Carolina affiliate of the National Association for Gun Rights, a non-profit organization under section 501(c)4 of the IRS code.
Donations are unlimited, but they are not deductible for federal income tax purposes.
Privacy Policy